Nice! You decided to build your own little MIDI controller! well played.

First off, let’s take a look at the parts shall we: 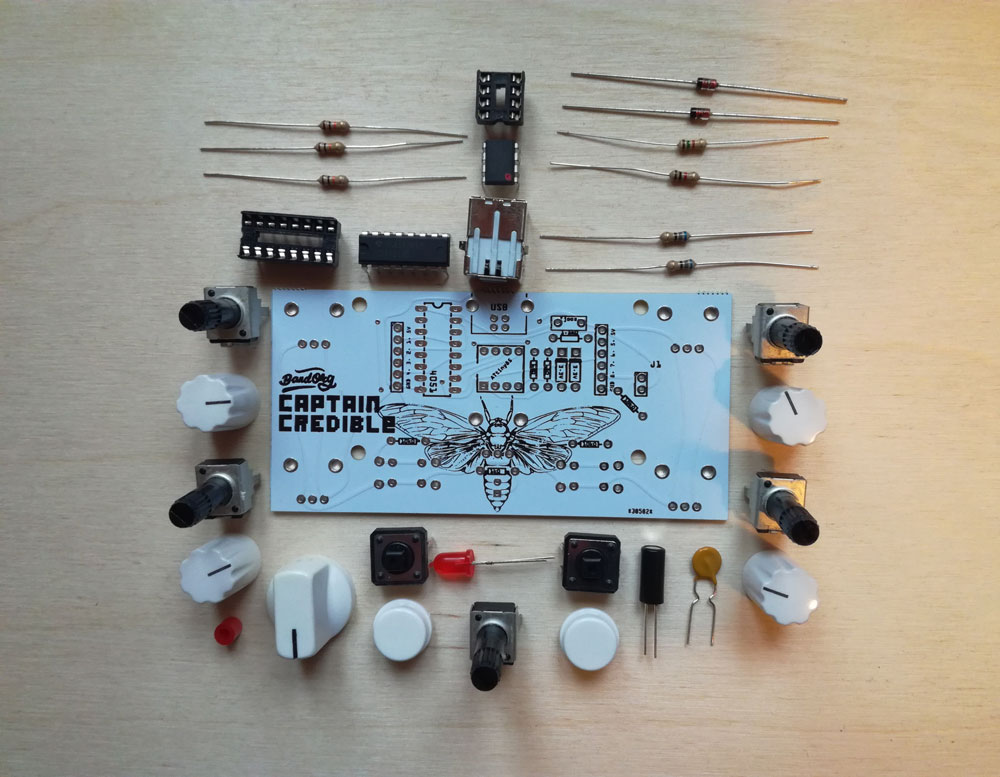 ok then, now what?

BE AWARE, DONT LET THE DIFFERENCES BETWEEN REV3 AND EARLIER REVISIONS FREAK YOU OUT!

Flip the board over, solder the leads and cut them off:

Resistors like these are not polarized. that means it makes no difference what way around they go in. Some components are polarized though and I’ll make sure to tell you which components need to go the right way round!

Then let’s do this lonely 1k resistor (this will be the current limiting resistor for the LED):

Let’s do this 1.5k resistor near the top:

solder and clip as usual.

Now these 68ohm resistors just below:

solder, clip… you know the drill.

Don’t solder these in the wrong way!

The black band on the diode should be on the same side as the thick black marking on the board.

these are for sticking your chips in later. Put them in the right way round, making sure the notch is aligned with the gap or notch drawn on the board. These arrows will show you what I mean. 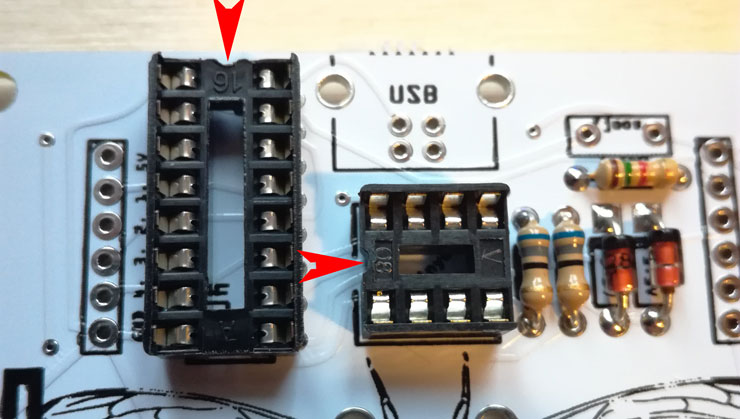 Solder all the legs. no need to cut anything off, they are super short anyway.

Careful when soldering these as the pins are quite close. Make sure you don’t have a clump of solder connecting the pins together. 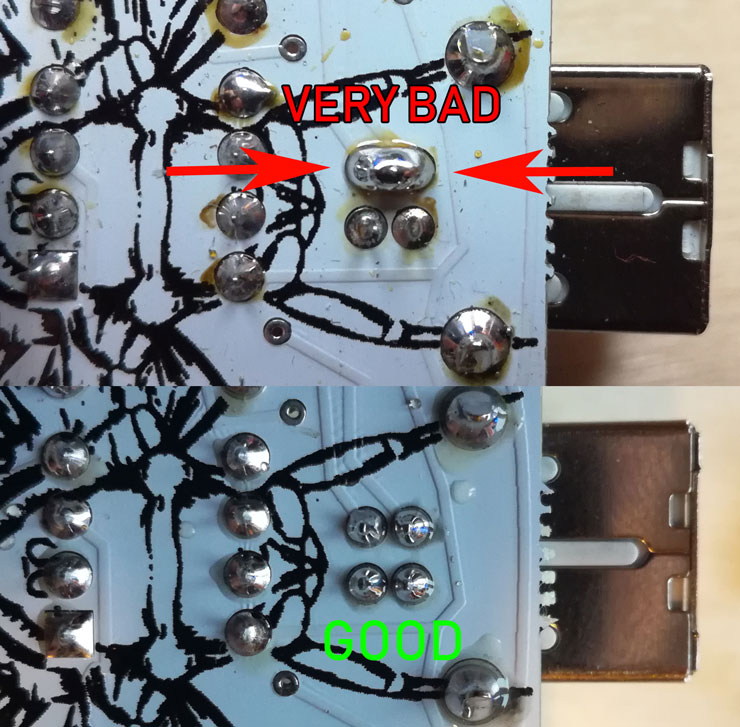 If you mess up like the top image, it’s usually just a case of running your hot soldering iron between the two shorted pins once or twice after cleaning the tip. The excess solder til stick to the iron and fix the short. if this doesn’t work you need to google “desoldering” and fix it using either a desoldering pump or desoldering wick.

This little bandy-legged friend will help avoid accidental damage to your computers USB port if you done messed something up big time.

REMEMBER NOT TO FREAK OUT IF YOUR BOARD IS REV3 AND THE TILT SWITCH IS LOCATED A LIITLE BIT FURTHER DOWN TO THE LEFT, IT’S OK!

solder this bitch on right here! This will help our Midimoth determine whether it’s upsidedown or not… for science reasons!

Flip the board over and pop these pushbuttons in place. 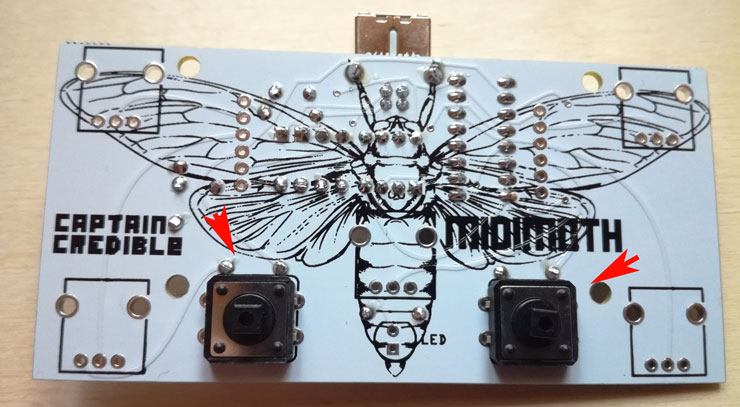 These need to be as perfectly straight as you can physically manage to make them. 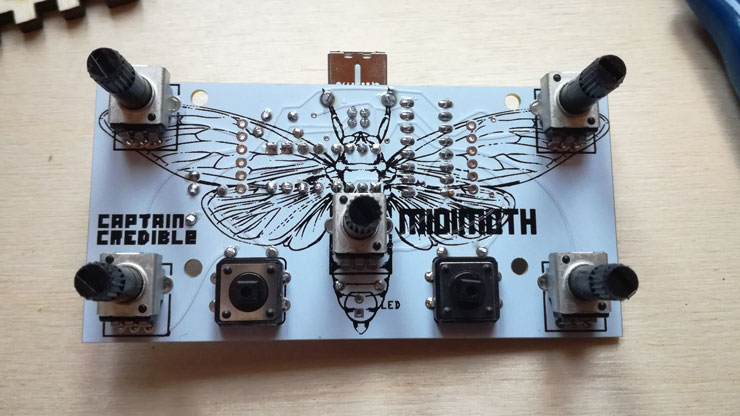 To make sure we get them damn near perfect. it’s a good idea to start by soldering only one ear per potentiometer: 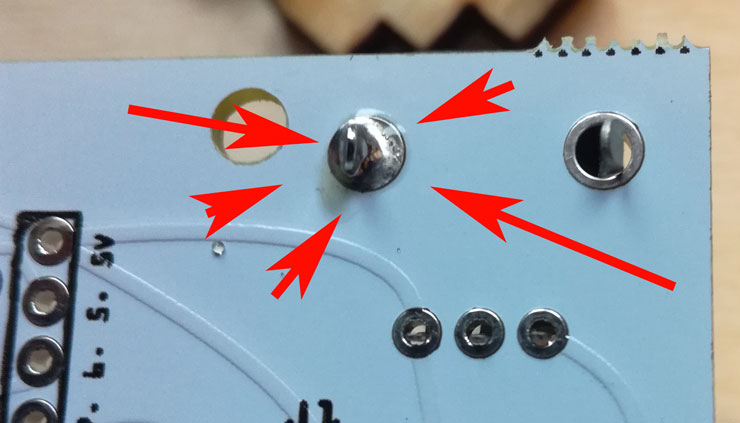 Then you can check if they are straight or not. If they aren’t just reheat the solder on the ear while you straighten the potentiometer.

The LED will light up to show that the device has power (cos, you know, it needs power).

The LED is polarized so make sure the long leg goes in the square (bottom) hole and the short leg in the round hole: 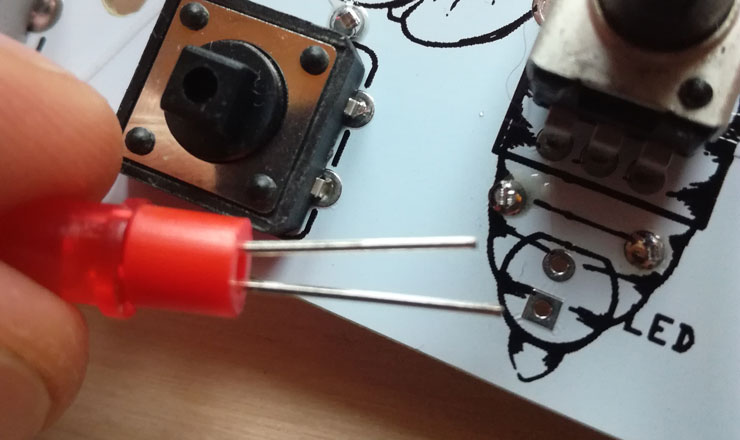 Stick it through and try to be quick and efficient when soldering as the bead we are using as a standoff is “kinda melty”. 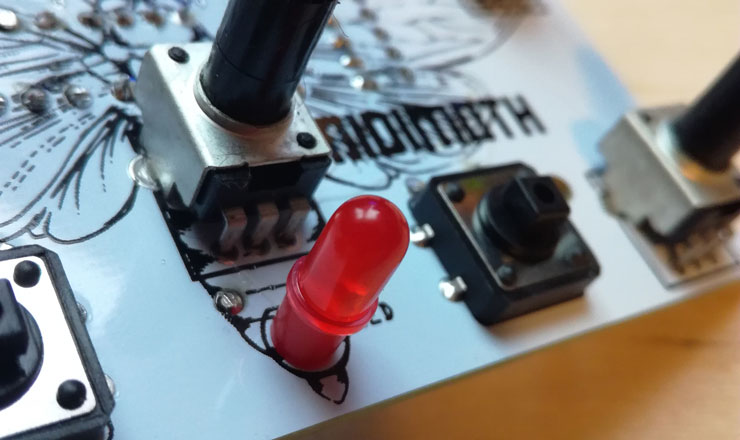 Straighten the legs against a tabletop and stick the chips in their sockets. Make sure the dot on the small chip is pointing to the left (the same side as the indent on the socket should be) and make sure the big chip has its indent pointing up: 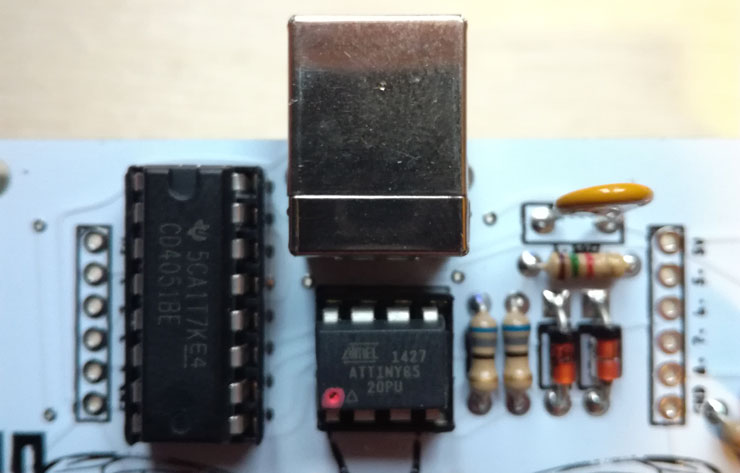 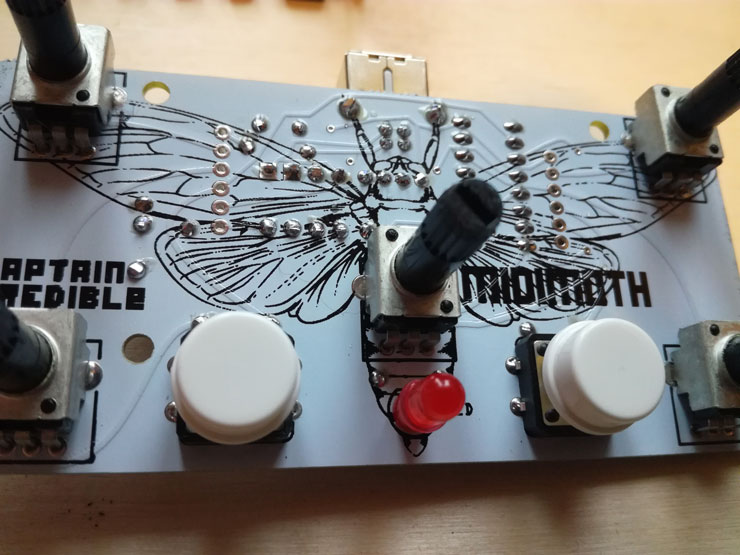 Remember i was nagging you about not getting freaked out because rev3 is different. Rev3 has a minijack input. Solder that bitch in place: 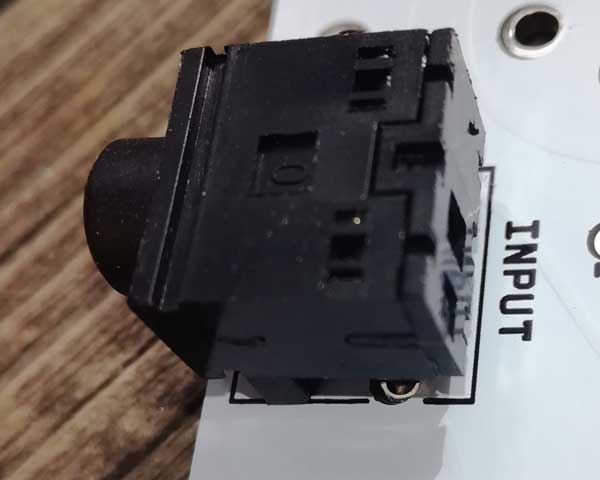 Stick it in the side where it says “input” (on the opposite side from the potentiometers and buttons). And try to make it sit as flush to the board as possible.

let’s be careful what we do on this step. we don’t want any accidents to happen. A perfect time to read up on the stupid stuff people do in the name of superstition.

You can hold your breath and plug it into your computer now: 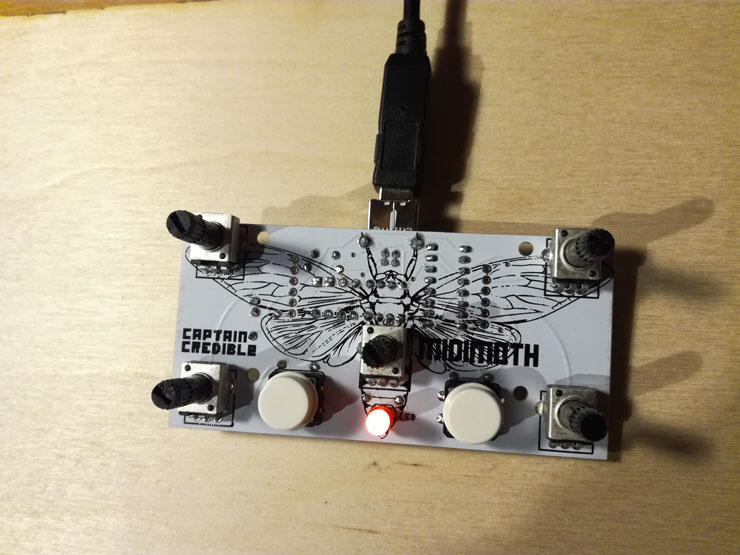 It should show up as “Midimoth”. Here it is in Ableton Live:

Step 15. put the box together and stick the knobs on:

It’s easiest to put the top and sides on first. 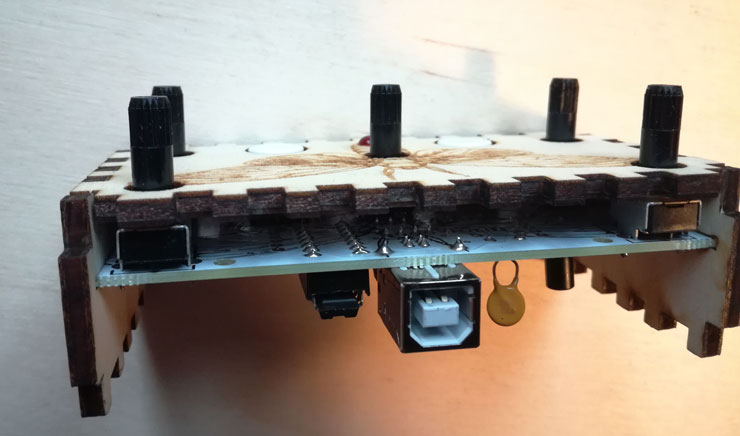 Then stick the rest on and put the knobs on your potentiometers. 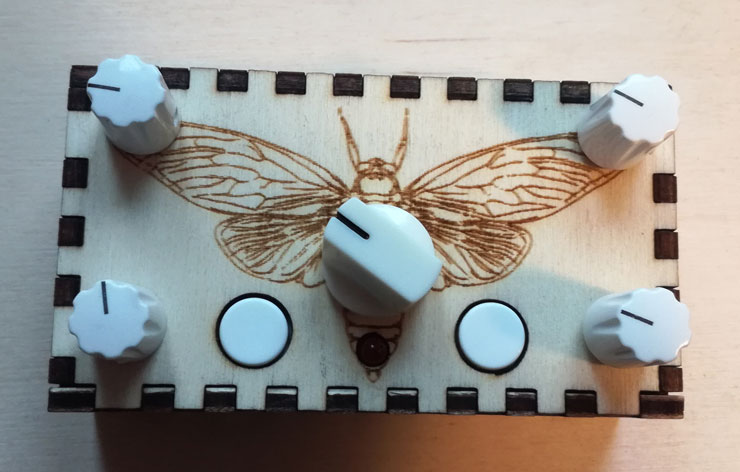 Make some music with it!