Blooper Eel Rev2 and over 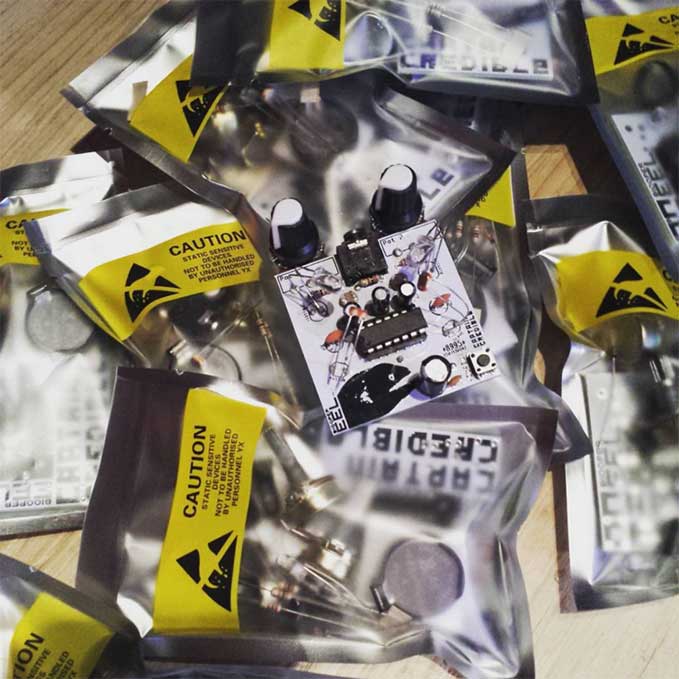 Aw yiss! You scored this awesome as fuck blooper eel rev2! Your arms are going limp with excitement but wait! How the arse tickling hell do i put this god forsaken piece of camel poo together?

Aha! thats why you’re here on this internet page! I am willing to bet that the answer you so desperately seek lies hidden in the text and images below. So get your lucky soldering iron out and lets get down to injuring ourselves and cursing over components that always seem to go under the settee when you drop them. 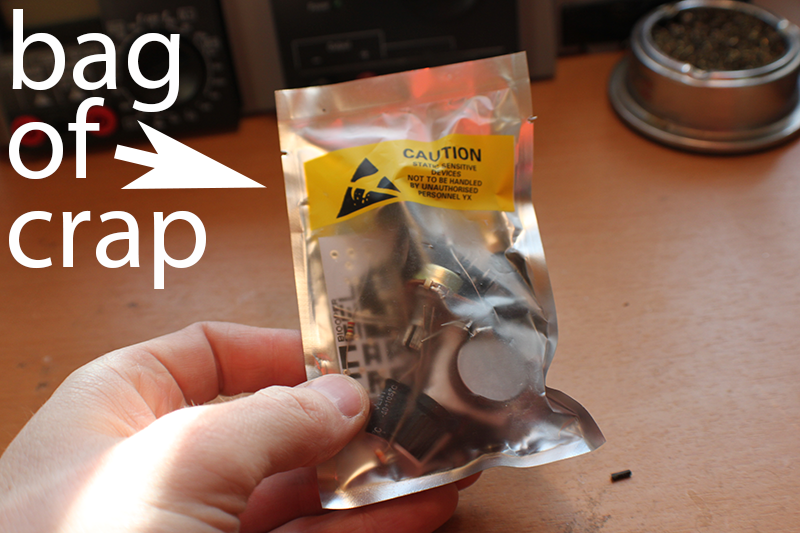 This should be pretty self explanatory but i made pictures in case you thought it was difficult.

if you are compulsive like me you might want to sort them, then you can see if anything is missing. this is what you should have:

Phew, its all there.Or is it…?

Step 2: Stick the IC-socket on there.

but dont put it on the wrong way round. that would suck. make sure the notch / indent on the socket is on the same side as it is drawn on the PCB: 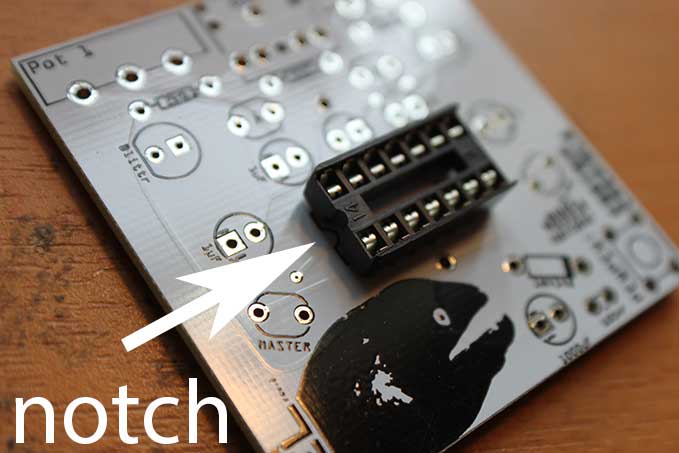 Bend some of the legs out on the underside so it stays in place while you solder it.

Oh yeah, youll need a soldering iron and som solder. I am going to assume that didnt come as too great a shock. 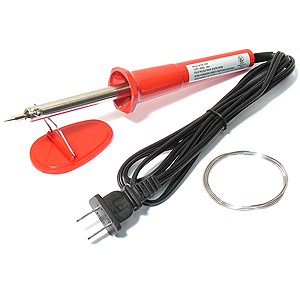 stick them above the chip here, making sure they are the right way round, the short leg goes in the hole marked “-“. You may notice that the capacitor body also has a  bunch of “-” written on the same side. 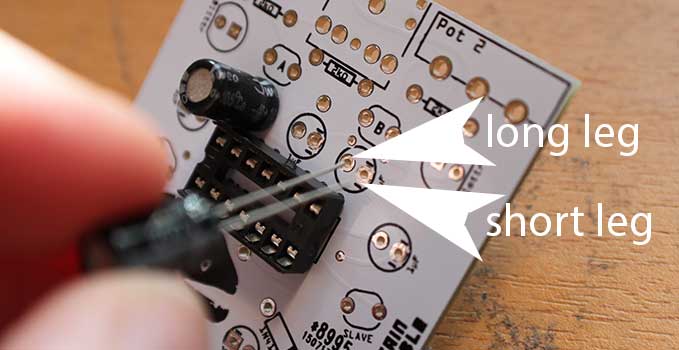 Bend the legs out so that the caps stay in place while you solder those bitches. Then clip the legs off with some wire clipper, watch out for flying bits of metal that might kill you. I put maknets on my wire clippers to try and catch these bits of metal, it usually works, usually. 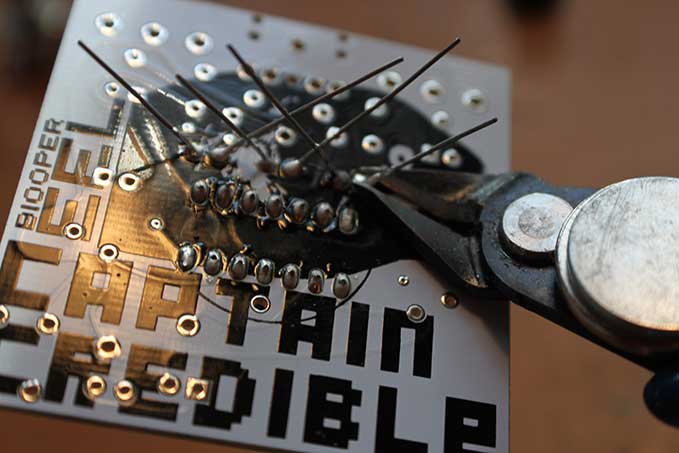 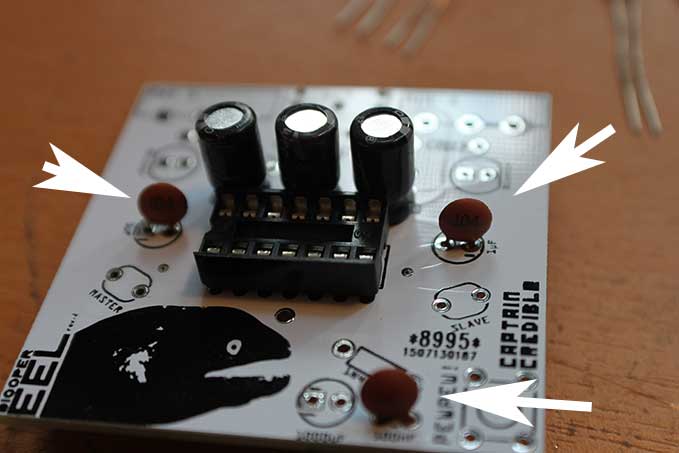 The more observant of you (using the rev2 pcb) may notice that one two of those spots are marked 1uF. I dont have a very good explanation for that other than “woops”

Solder them in place just likt you did with the other stuff.

Step 5: Put the battery on the right way round:

The battery goes on the bottom here, like this:

if you solder it on the wrong way round, you will not become rich and successfull, so dont mess this one up.

solder from the top, wherre the legs are sticking through, solder both legs or this isn’t going to work:

Are you ready for this? find these:

solder them in place here:

Step “whatever , I lost count”: stick 2 photocells/LDRs in there:

This is the headphone jack, incase you where wondering: 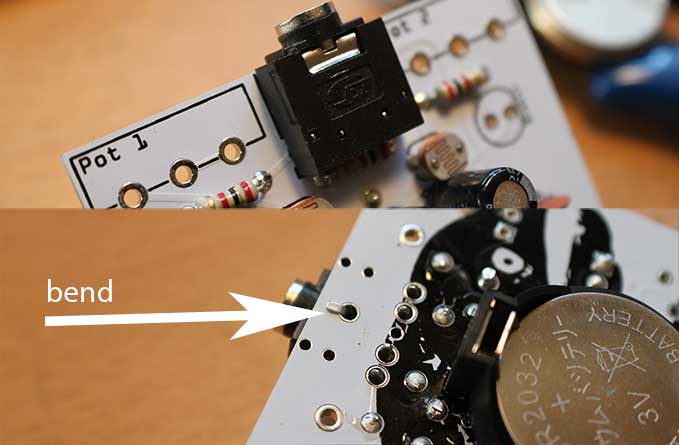 bend that leg so it stays in place while you solder it.

amazing, you nailed it!

These don’t want to go all the way through! just a bit! 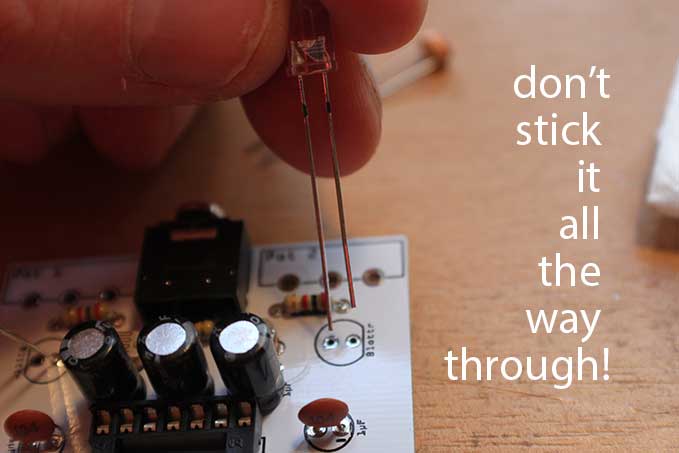 Try and get it to go just through the surface, both the legs need to go through the hole, only just though. 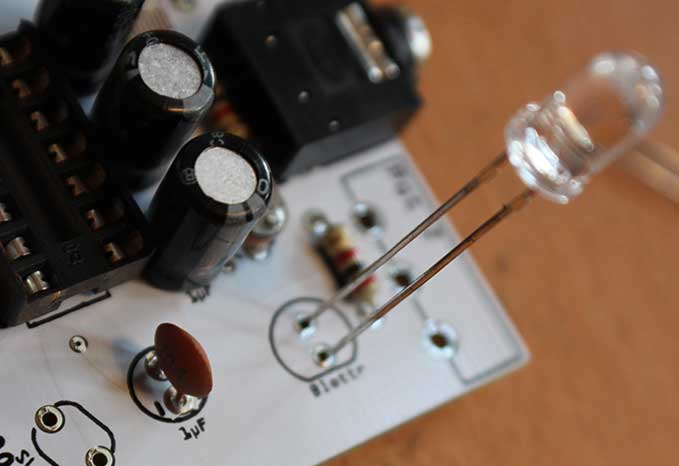 Solder from the top of the pcb: 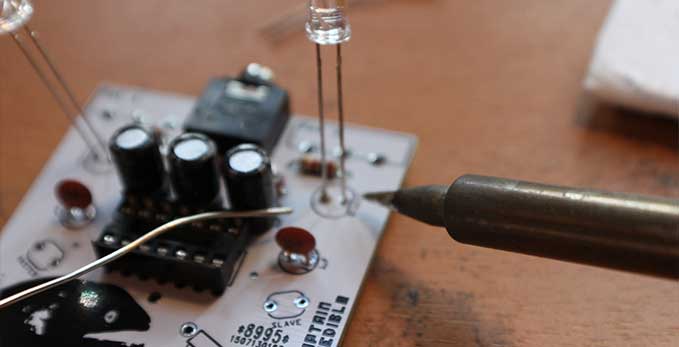 and the same with the led on the other side…

remember that thing you just did with the LEDs? do the same with your two remaining LDRs

solder it in place here, make sure the stripe around the diode is on the same side as the stripe on the PCB! 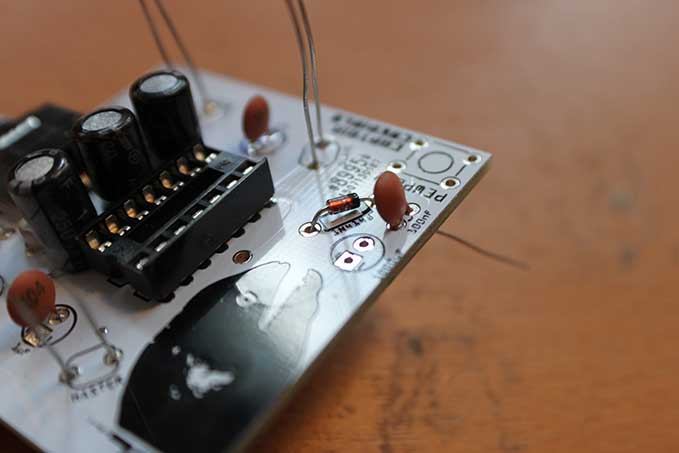 Step 12: Solder the “pewpew” switch on there.

not mutch can go wrong here, but i added a bunch of arrows just in case: 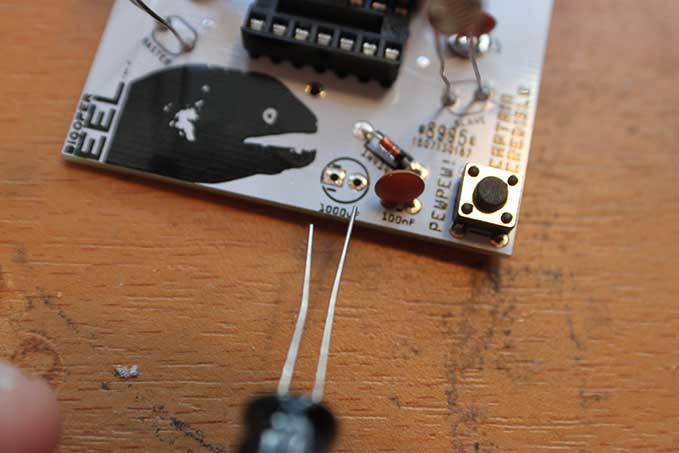 First of all youll need to bend the potentiometers legs 90 degrees in order to show it who’s boss, and also so it will fit properly. This is how i bent mine:

Then feed the legs through the pcb from the underside and solder them in place here: 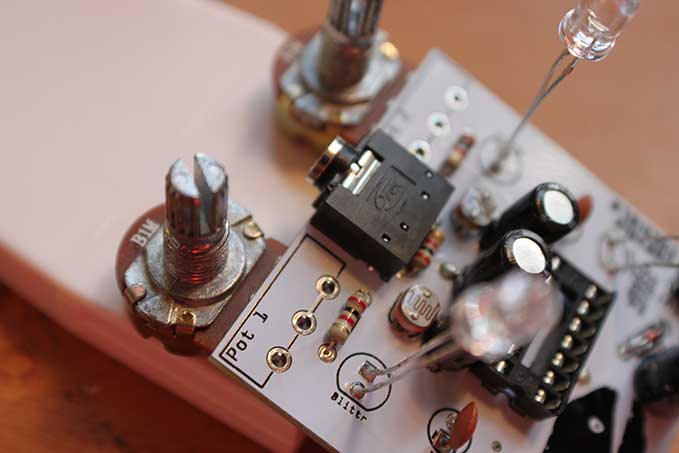 I rested them on a white plastiv thingy while i soldered them.

You might want to straighten the legs a bit first so they are pointin straight down. Then make sure you put the chip in so the notch/indent on the chip alighns with the notch / indent on the socket and the one drawn on the circuitboard. 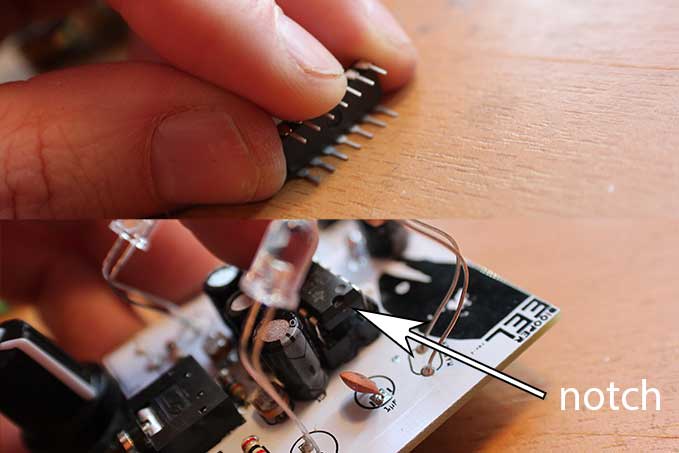 I also pushed the plastic knobs onto the shafts of the potentiometers, you should do this too, it makes it look nicer.

plug it into some headphones/stereo/whatever and push that “pewpew” button! bend the blinky leds to point at the photocells! twist the knobs to control the blinkyspeed of the blinky leds! Turn the lights of! turn them on again! Turn them back off again! It was cooler in the dark wasn’t it!

Below is a list of fun activities to do with your blooper eel: 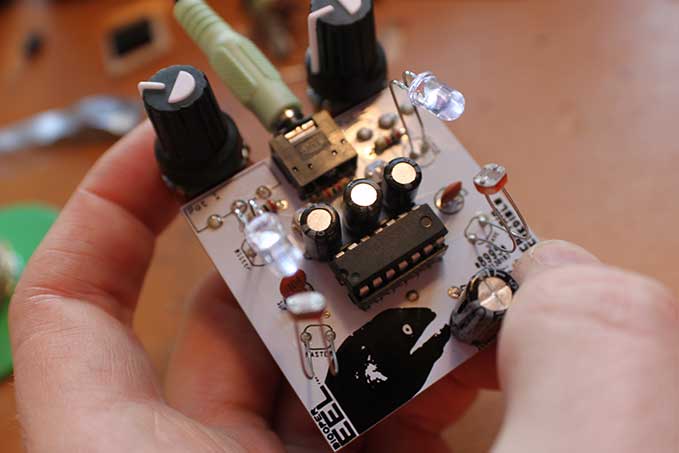 See how many of Beethovens symphonies you can play

Compete with friends to make the most annoying noise

Try to sleep a whole night with it on really loud

Plug it in to your schools calling system, turn it on, lock the door and leave

Impress your cat with long solos

See if it works under water (it probably doesn’t)

Use it in your live performance:

Didn’t you quite nail it?

if not, maybe you put something in backwards?  maybe you need to watch this?: